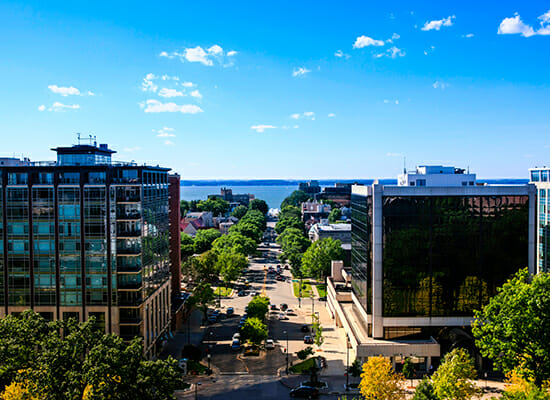 An Over-Supply of Madison Apartments…Or Not?

Madison is poised to experience an unprecedented influx of new apartment units in 2013 and 2014. According to Michael Dean, President of the Dean Realty Group, Inc., the glut of new apartments won’t cause seismic changes such as plummeting rents or sky-high vacancies. It will, however, improve the renting experience and the downtown area in exciting new ways.

Dean’s company specializes in selling apartment buildings, and we tapped into his expertise because of the research his company does regarding rental trends in the Madison area.

According to Dean, the number of new downtown apartments scheduled to appear in Madison has seldom been seen before. In the next two years, 2,170 apartment units will be coming on line to the downtown area (700 in 2013 and 1,470 in 2014), an amount that would surpass deliveries for the previous 10 years.

The numbers immediately cause much joy among renters (lower rents!) and consternation among owners (lower rents!) However, Dean doesn’t envision a return to the renter’s market of the mid -2000s, in which rent fell through the floor and property owners hung on for dear life. Instead, the new development will produce positive effects for all involved – renters, owners and the city in general.

The Perfect Storm of Downtown Development

The huge increase in downtown apartments can be traced to a number of market-driven events. First, in 2006, the Wisconsin Court of Appeals overturned the City of Madison’s inclusionary zoning law, which mandated that an apartment building must include a percentage of units with lower rents for people of lesser economic means. Many developers felt the ordinance made the construction process too onerous for downtown developers, and they focused their efforts on suburban areas.

Second, beginning in 2008, the recession took hold of the US economy, and any development in the downtown area virtually stopped. Over the next several years, interest rates slid lower and lower as the government, aka the Federal Reserve, embraced lower rates as a method to stimulate the economy. Now those low interest rates have reduced the overall cost of development.

Finally, as a result of the lack of development, downtown vacancies became virtually non-existent, shrinking to a miniscule 2% (the current rate). Dean notes that the ideal vacancy rate would be 5%, a point in which neither renters nor property owners seem to have a discernable advantage. In other words, there is much pent-up demand in the downtown area.

These three factors conspired to unleash a flurry of new development, one that’s highly unlikely to be repeated. As Dean notes, interest rates probably won’t return to such historic lows, and the vacancy rates will likely increase with the new development.

For now, this appears to be a unique phenomenon. So what does this mean for Madison renters?

According to Dean, this influx of new apartments means more options for renters. Before, if someone wanted to move from Apartment A to Apartment B, they had limited choices. They had to find an apartment where the lease ended at about the same time, and if they were looking in a particular neighborhood, they might find the pickings slim. “Our market was too tight,” Dean said.

Now a renter will have more options to choose from, although not necessarily lower rent. For a renter to get the extremely low rents, you’d need a housing bubble akin to 2005-06 when renters were taking advantage of lax lending guidelines and scooping up new houses.

At that time, suburban renters were getting 2-3 months’ worth of free rent when they signed a lease, and Madison didn’t see a rent increase for 5-6 years. “Property owners were hemorrhaging,” Dean said. He doesn’t anticipate that type of market because the low vacancy rates will absorb most of the new developments.

Dean does see new benefits for renters in the following areas:

More amenities, better service. Because vacancy rates won’t skyrocket, rents won’t come down, so owners will have to focus on new ways to differentiate their properties. One surefire method is to focus on amenities and better customer service, something any renter would appreciate.

Neighborhoods will matter. More than ever, the benefits of a particular neighborhood will come into play. For example, someone looking for easy access to bike paths and the activities at the State Capitol will now find more availability in the Bassett neighborhood. “We’re going to see development of more neighborhood sub-market identities,” Dean said.

Old properties will get a facelift. The influx of new properties mean existing rentals will probably get refurbished. Dean said he’s already hearing about how many owners are “stepping up their game.”

Owners will change their management style. It used to be a “mom and pop” marketplace, but now you’ll see more market-savvy organizations that produce a better product that delivers for customers.

Madison becomes more dynamic. The downtown’s resurgence, which Dean notes began back in 90s, will only gain momentum. More people in the area means a greater need for services such as restaurants, nightlife, and culture.

Dean takes issue with the opinion expressed in a recent Isthmus article that the influx will create less affordable housing.

While he acknowledges many of the new buildings will be “luxury” apartments targeting young professionals like those at Epic, he doesn’t see that in resulting in fewer options for lower-income people.

On the contrary, more young professionals will migrate from cheaper apartments to the new ones, increasing the number of moderately-priced units available to the market. “The more housing you have, the cheaper it is,” Dean said. “To say this wouldn’t be a benefit would be to deny the laws of supply and demand.”

If Dean’s interpretation of the data is correct, Dean sees big benefits for the city of Madison. There will be more apartment choices, neighborhoods will improve, and owners will step up their game. Who will be the clear-cut winners? Renters.

So get ready for a great rental ride, Madison. The fun is about to begin.

Everything you need to know when searching for your first apartment.