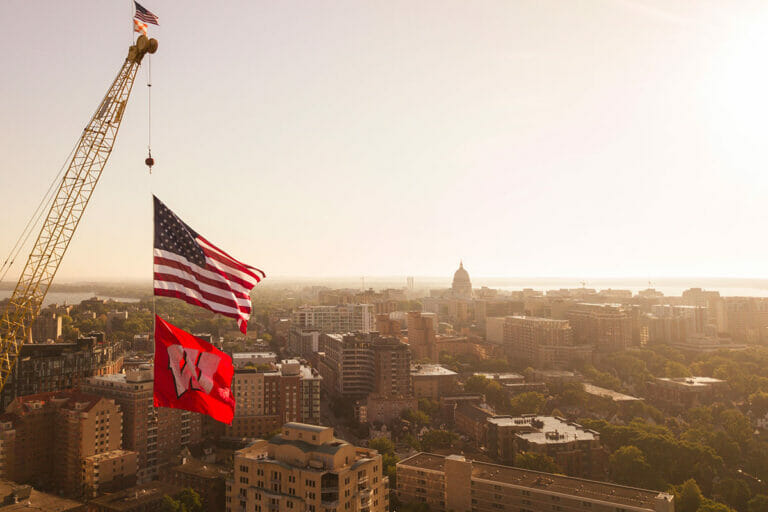 As new apartment buildings continue to spring up in downtown Madison, the apartment vacancy rate has reached 5.73% for the 53703 zip code. It’s a level not seen in over 14 years. Check out these and other statistics that reflect the Madison rental scene.

Last year, we reported that Madison’s apartment scene has become increasingly congested with new buildings. Even though the pace of new construction has declined (as we’ll touch on in a bit), all this rental space is pushing vacancy rates to new heights.

These statistics are reflected in Downtown Madison Inc.’s (DMI) State of the Downtown Madison 2017 Report. DMI generates the report to “better understand the current state of our downtown and to help plan for future projects, growth, challenges and opportunities to maintain a healthy and viral central city.”

The apartment vacancy rate is the percentage of units in a rental property that are vacant or unoccupied. Since the recession of 2008, Madison has reported a continuous increase in the vacancy rate.

The report pulls from MG&E data for the 53703 zip code. Data for the third quarter has been subsequently released for Q3, and the rate has actually increased to 5.73%. At this point last year, we were reporting it had climbed to 4.22%.

That number is outpacing the 4.12% vacancy rate in the overall Madison area.

What Does the Higher Vacancy Rate Mean for Renters?

We delved into this question back in 2013, when we were first beginning to see the construction boom hit the Madison apartment scene.

As we noted in the post, it was a renter’s market back in the mid-2000s, when the vacancy rates approached the levels we are seeing now. However, at that point, we were in the midst of a housing bubble.

Thanks to lax lending guidelines, people were buying new houses right and left. This eventually led to the collapse of the mortgage industry and sparked the recession of 2008.

Today, lending restrictions have tightened, and that environment doesn’t exist. We believe now, as we did in 2013, the rising vacancy rates won’t necessarily mean rental rates will fall. Instead, the higher vacancy rates will result in:

An important point made in that 2013 article was that the downtown would enjoy a resurgence and revitalization. The influence of Epic on the rental scene, as well as Madison’s burgeoning status as a growing tech hub, would lead to more luxury apartments.

It would also lead to more restaurants, nightclubs and culture in the downtown area. DMI’s report shows that prediction is coming to fruition. In 1998, we saw 81 “food and drink” businesses. In 2017, the number jumped to 149.

Other Aspects of Downtown Madison Life

Crime
Criminal offenses in Madison declined, at least through 2016. These stats are from the City of Madison Police Department, and include a wide range of offenses noted on the graphic.

Parking
Compared to Chicago, parking is a dream here in Madison. Our rates are right around what you’d see in larger urban areas, such as Milwaukee or Minneapolis.

Transportation
Madison is a great bike city, and it shows. Check out our rating compared to other famous bike towns!

What’s Next for Madison?

While there appears to be a slowdown in construction of new apartment buildings in the downtown area, it doesn’t appear that Madison is losing any steam in terms of attracting young talent and adding to the vibrancy of downtown.

That kind of growth is exciting for downtown, and the Madison area in general.

How will all of this affect renters? We’ll return to the predictions from 2013. Without a housing bubble to deal with, we think the market will be good for renters and property owners alike.

More competition means better apartments and service for you, and better living conditions for Madison. We’re looking forward to 2018!

Should you buy or rent?

Download a FREE comparison tool to make the right choice!

7 Madison Winter Parking Tips You Must Know When it Snows