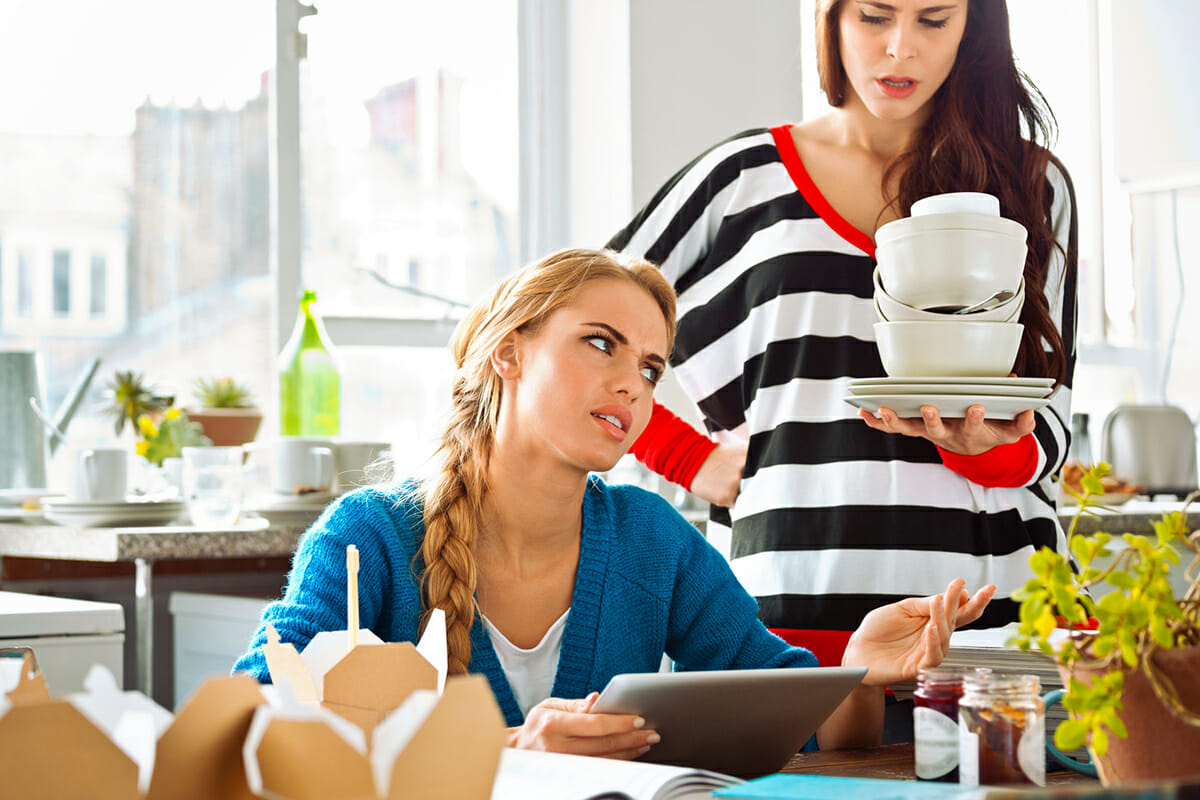 How to Handle 9 Typical Roommate Problems

Got a bad roommate? You’re not alone. A study from Boise State University ScholarWorks revealed that 25% of students reported college roommate problems. But you can deal with the problems — by learning how to deal with conflict in general.

Studies like the one from Boise State reveal college roommate problems can cause stress that may ultimately hinder college success. We know.

Because we’ve managed private student residence halls for decades, we’ve seen firsthand how big of a problem roommate issues are. But seeing the scope of the problem quantified definitely makes you think about roommate problems in a whole new light.

WHAT ARE COMMON COLLEGE ROOMMATE PROBLEMS?

Research and our own personal experience indicates typical problems include:

5. Generally not getting along

Ironically, because it’s so difficult for roommates to resolve these big conflicts, insignificant issues can become more pronounced. “He leaves the lights on,” for example, might become the number one gripe.

Please note that we’re presenting a wide range of research in this post, and some of it dates back to 2004. We still believe the findings are relevant.

Let’s start with the big number: A survey conducted in the fall of 2008 by Boise State found that around 25 percent of students reported roommate issues in the preceding month, with females more likely to report experiencing a problem than males.

Now let’s also consider that eye-popping stat with some conclusions from other academic studies:

JUST HOW MUCH CAN A CONFLICT IMPACT YOUR SCHOOL SUCCESS?

Ok, we know academic researchers will have fits if we string all this data together, but when you consider those findings, it’s hard not to tie it in with this number:

According to the U.S. News and World Report, “30% of college and university students drop out after their first year.”

That’s huge. But is there a relationship between all of this data? Does a roommate problem cause a student to drop out of school?

You can’t draw that conclusion from the data, but you can make the case that it contributes to stress, and stress is a big impediment for success.

The corrective action is then clear, right? Reduce roommate conflict, and you improve the chance for success. That’s easier said than done, especially for college freshmen and sophomores.

First, let’s make sure you understand the improper way to deal with conflict.

We know for a fact those methods don’t work. So what does?

The following methods aren’t designed for each of the specific issues we listed at the beginning of the post. We’re going to describe how to solve conflict in general. Because if you know how to solve a problem, then the nature of the problem won’t matter. That’s why our list starts with:

1. Understand how YOU resolve conflict

We want to resolve conflict on our own first and foremost. That can be done, but only if you and your roommate are aware of how you deal with conflict. When you understand your personal conflict resolution style, then you can figure out how to handle problems.

For example, people who avoid confrontation will only deal with conflict in a controlled environment, usually with a mediator present. Someone who is more confrontational can’t be argued with: Instead, resolution with the person needs to be a win-win situation.

To identify how you resolve conflict, download the Roomies REUNITED Guide. It has a scoring system to help you self-evaluate.

Knowing your own conflict resolution style is a great first step. But many people, especially freshmen and sophomores, need a little extra help.

As the studies indicated, the chances of resolving conflict nearly triple when some sort of mediation is used. That number will be influenced by the effectiveness of your mediator, but it’s definitely the direction you want to take.

Research done by Robert Rodgers of Ohio State University in 1983 shows how successful a mediator can be. “Control or resolution of roommate conflicts was achieved in 67% of the cases using mediation, compared to 25% for a comparison group using regular methods.”

3. Deal with the problems upfront

Knowing your own conflict-resolution style and the type of issues that prompt roomie problems should enable you to be proactive.

Don’t wait until problems occur. Set up guidelines beforehand. How will you handle food sharing? How will you deal with paying the rent (if you’re on a shared lease)? Go through the list of conflicts and talk about the issues while you’re calm, not when there’s a problem.

It’s ideal if these issues are handled before you even move in. Heck, you may want to take a swing at them (a figurative, not a literal swing) BEFORE you even sign the lease. Best to see if there will be a problem before anyone signs the bottom line.

4. Keep talking – but only face-to-face (No subtweeting! EVER!)

The lines of communication must stay open, as we’ve noted in this post. Good listening skills and a good attitude are paramount to solving a problem.

Do NOT try to solve an issue using text, subtweet (social media) or email. People get overly bold, aggressive and downright mean when they don’t have to deal with a person face-to-face.

Even if the best-intended messages can be misconstrued when you’re dealing with sensitive topics. Keep talking, but keep it face-to-face. Check out this recent subtweeting nightmare as proof of what happens when you don’t.

5. Don’t aspire to be best friends — be best roommates

The key here is to recognize that just because you’re not great friends doesn’t mean you can’t be great roommates. You can each have your own set of mutual friends, but what’s important is that the two of you co-exist as roommates. That means you respect each other and are mindful of things that can cause the other person stress.

Most roommates mistakenly think that if they line up with someone that’s like-minded, who has the same interests, friends, etc., that no conflict would potentially arise.

But conflict is inevitable. People are just too different for it not to occur. The roommate problems begin — even between best friends — because you don’t understand how to handle the conflict after it occurs.

It’s why complete strangers make better roommates than long-standing friends: You may not be best buds, but you can resolve problems to avoid becoming big enemies.

The research findings in this post give us a sense of the magnitude of the problem. We’re going to leave you with one last piece of research that shows why this is an important issue.

Education drives our economy, and we need an educated workforce now, more than ever. After all, as noted in this piece in the Huffington Post, “Unemployment for college graduates is about 4 percent, compared with about 9 percent for those with only high-school educations.”

Resolving roommate problems will reduce the stress level of our students, and improve their chances of college success. So forgive us if we’ve connected the dots here in a less than statistically valid way.

It’s just that addressing roommate conflict is an important issue, and with greater awareness and more cooperation, we can make a difference.

How to Keep an Apartment Cool Without Air Conditioning

Made in Wisco by Dirigible